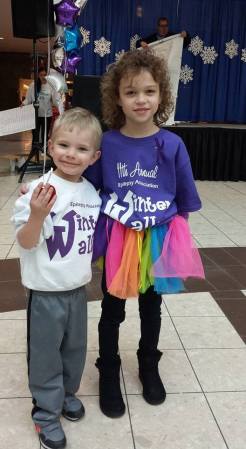 Children CAN make a difference! Take Ryan Wood for example.  At 4 years old he is preparing for kindergarten, looking forward to summer T-Ball,  and enjoying being a big brother.  He is also making positive change for other children.  Ryan participated in the 2016 Winter Walk in which he rode his scooter the entire course at Strongsville Mall.  When asked why he did this he reported, “I want to help other kids. There are kids that have epilepsy that can’t be here for all the fun”.  Ryan spent several weeks campaigning by making phone calls to family and friends as well as posting a series of videos on Facebook to talk about epilepsy and how important it is to help others.  His videos were shared on many different Facebook pages and he received donations from several different states!  Every day after preschool he would ask to view his website to see who donated.  He then would call and thank them.   Ryan’s success was so much more than he and his family could have imagined!  He raised $825 for the Epilepsy Association which made him to top fundraiser for his age group.  Ryan attended  the

Purple Day Power Lunch at the Epilepsy Association in which he received an award for his efforts.  He was permitted time at preschool to share his award with the classes and talk about epilepsy and helping others.  Ryan’s preschool, St. Augustine Manor Child Enrichment Center, also hosts a Purple Day event in which the children learn about epilepsy through an in-service or puppet show, wear purple, and create purple projects.  The children created a poster this year that currently hangs for all visitors to the Epilepsy Association to see.

Ryan may only be 4 years old, but his efforts raised funds to provide support services to children with epilepsy and their families at no cost to them.

If you would like to learn more about the services that Ryan raised funds for, or helping your child’s school set up an in-service to provide epilepsy education, please call the Epilepsy Association at 216-579-1330.

Say the word “pink” and most people will think of Susan G Komen and Breast Cancer Awareness. However, how many people know that purple is the color associated  with the Epilepsy Association and the international Global Epilepsy Awareness Day known as Purple Day? It took the creativity of a young girl, Cassidy Megan, from Nova Scotia, Canada to conceive Purple Day as a way to raise epilepsy awareness.  The name Purple Day was chosen after the international color for epilepsy, lavender.  The lavender flower is associated with solitude which represents the isolation many people who have seizures feel.  I am a pediatrician and I am pleased to be involved with the Epilepsy Association as a member of the Physician Advisory Board and also as the chairperson for the Cleveland area Purple Day. The Epilepsy Association is a non-profit organization which provides much needed services to help those with epilepsy navigate their lives.  Purple Day is an international movement celebrated around the world on March 26th.  Many of you may have epilepsy or know someone with epilepsy as more than 3 million Americans have some form of epilepsy. Many of you may not know that someone you know has epilepsy as there is a veil of secrecy associated with the disease. No matter who you are I challenge you to help raise epilepsy awareness by wearing purple on March 26th .For those of you that are more ambitious or want more involvement go to www.epilepsyinfo.org to find out about other activities taking place for Purple Day and how you can take part! Join us for the Epilepsy Association Purple Day Party on March 26, 2013 at P J Mcintyre’s Irish pub located at 17119 Lorain Ave from 5:30-7:30pm by purchasing tickets at www.epilepsyinfo.org